Gabrielle Showalter gives an overview of why 'Parasite' is such a work of art, without giving away any major spoilers.

In a stunning upset, Parasite prevailed against the likes of predicted favourites 1917  and The Irishman to win four Academy Awards this year, including the coveted Best Picture and Best Director prizes. As the first non-English language film to ever be awarded Best Picture, this historic win follows a highly successful award season for the film – Parasite also claimed the Palme d’Or at Cannes, a SAG Award for Outstanding Performance by a Cast, and the BAFTA for Best Foreign Language Film among a series of other accolades. 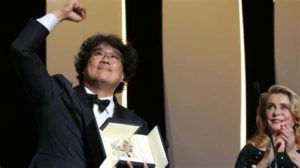 Here’s what you need to know about Parasite: It focuses on two very different families living in Seoul, South Korea. The impoverished Kim family lives in a small sub-basement apartment in a poor neighbourhood, while the wealthy Park family lives in a massive house that seems more like a contemporary art-installation than a home. The two families are intertwined when Min, a college student, asks the Kims’ son Ki-woo to take over as tutor to the Parks’ daughter, Da-hye.

Despite having no university degree, Ki-woo is very intelligent and enlists his sister’s help to forge documents that ‘prove’ his qualifications. Min has told Ki-woo that the Park mother is very “simple”, so Ki-woo raises no suspicions and is quickly hired. During his first meeting with the Da-hye’s mother, he discovers she pretentiously thinks her young son Da-Song’s crayon scribbles are proof of artistic genius.

Ki-woo devises a plan to get his own sister Ki-jeong hired as an art therapist for Da-Song, pretending she is a friend of his cousin. Again, Ki-jeong is hired on the spot by Da-hye’s incredibly rich and gullible mother. Seeing an opportunity, the Kim family devise a plan to secretly install the entire family in the Park home, getting the family’s chauffeur and housekeeper fired in quick succession and replacing them with their own parents. The Kims are now parasitically feeding from the wealth and naivety of the Parks, every one of them on the Park family’s payroll whilst maintaining the illusion that they are unrelated.

That’s about as much of the film that can be discussed without major spoilers, but be assured this brief introduction is only the tip of the iceberg. This short synopsis sets the scene for the mind-bending, explosive twists of the second half that completely and utterly transform the movie. A comedic social critique becomes a tragic, heart-racing thriller.

Bong Joon-ho is a master at work here – every cinematic element of the film is executed with the precision of a surgeon’s scalpel. Seamlessly, he moves between action, comedy, satire and horror, making Parasite difficult to place into an airtight genre. Suspense is built in such a light and subtle way that the film easily pivots from comedy to thriller without ever showing you the strings.

The members of the cast, too, deliver outstanding performances – ones that remained largely (and tragically) unrecognised this award season. Song Kang-ho’s portrayal of the Kim father is nothing short of heart-wrenching, and Cho Yeo-jeong’s part as the rich housewife is executed with humour and skill. The two younger cast members, Choi Woo-sikh (who played Kim Ki-woo), and Park So-dam (Kim Ki-jeong) give breakout performances, walking the line between comedy and drama excellently.

With an excellent ensemble cast, breathtaking directing, and precise storytelling, Parasite is everything you could want in a film. Blending urgent social commentary with gripping drama, this film lives up to and surpasses any hype surrounding it. If you see one film this year, make sure it’s Parasite – and be prepared to be completely and utterly blown away.

We are always looking for new writers, for a chance to write for us, sign up here